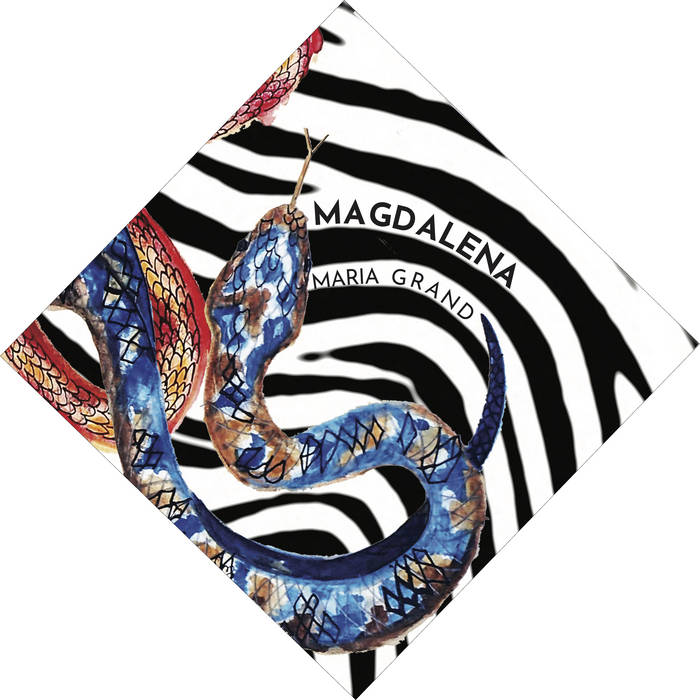 Eric Mulkey A journey through this album is an emotional voyage through stories brimming with symbolism and narrative drama. Grand’s artistic genius is rivaled only by her technical prowess as a singer and saxophonist, while her exceptionally talented fellow artists weave a robust and original aesthetic to the composition. If you like to be challenged by a piece of music, this work will have you sitting at home many evenings over, peeling back layer after layer of meaning as you dust off the pages of your Joseph Campbell books.

Following up her 2017 debut EP Tetrawind (“kinetic and abstract … intuitive and confident,” jazzweekly.com), tenor saxophonist, composer and vocalist María Grand returns with her full-length debut Magdalena from the innovative Biophilia Records. Her guiding intent is to explore modern family relationships through the lens of Egyptian and early Christian myths, connecting them to the pioneering work of family therapist Virginia Satir. Proceeding from the conviction that “healing families heals humanity,” Grand conceives a set of music within “a feminine non-hierarchical power structure,” she explains. “This means that the traditional form of solos is exploded into a more collective conversation.”

In the mercurial, asymmetric rhythms and flowing dialogue of Grand and her core trio with bassist Rashaan Carter and drummer Jeremy Dutton, we hear the musical analogue of two parents and a child. This trio dynamic is manifest most clearly on “TI. Isis,” “TII. María” and “TIII. Magdalena,” each constructed around a particular triad and inspired by three mythical women who serve “as examples of a woman’s power,” Grand says. These pieces also contain layers of symbolism: on “TI. Isis,” as Grand states in the liner notes, “The melody has every note that exists in a chromatic scale except for one, the piece that Isis didn’t find after Osiris died.”

The guests appearing on Magdalena serve to vary the sound and the relational dynamic, “providing more complex domestic structures to the music,” Grand offers. Pianist David Bryant, who played a brilliant role on Tetrawind, lends bracing and mysterious harmonic aspects to five tracks. On the duet piece “Imani/Walk by,” inspired by vocalist and composer Imani Uzuri, we hear from pianist and Biophilia founder/director Fabian Almazan, who interprets the song with gradually increasing adventurism. We also hear Grand stepping away from the saxophone to sing. “I’ve always written songs with lyrics,” she says, “and I don’t see that as fundamentally different from the instrumental music. For me it’s about balance: it’s a more vulnerable and fragile part of my expression.”

Grand’s cool legato voice surfaces again on two duets with acclaimed guitarist Mary Halvorson, playing acoustic with otherworldly effects (“I don’t know her secrets,” Grand says with a laugh). The two met while teaching at Karl Berger’s Creative Music Studio and formed a close friendship. “She came in and did exactly what I love,” Grand enthuses. “I love the tones that she got. She’s a great accompanist, she doesn’t overplay. The harmony was specific because there’s all these weird clashes that I wanted, and in Mary’s choice of voicings she found ways to highlight those clashes.”

Grand’s compositional methods tend to mirror the often very personal meanings of the songs themselves. “Workshop,” with its heightened tension and release, is the most directly inspired by Virginia Satir’s model of the family therapy workshop or “family constellation.” In this experience, Grand explains in the notes, “tension builds when people release deep trauma into the world. The pain that was hidden makes its way to the surface and is finally recognized.”

“Where Is E,” a reflection on Grand’s estranged sister Eleanora, is more personal still: “In the intro the piano and saxophone are together, and then eventually they separate. The whole thing is about looking for her, so we go through every triad and see if we can find her. It’s kind of like going through the whole phone book. I wrote the song hoping it would move the energy so that then I would actually meet her.”

“La Inmortal” and “Ejes y deseos” serve as narrated opening and closing statements, the former with the poetic recitation of vocalist Jasmine Wilson, the latter with the rap vocal of Amani Fela. Grand wrote the words herself but wanted to incorporate other voices to bring them to life. “I recited a poem on Tetrawind,” Grand recalls, “but on ‘La Inmortal’ I wanted someone with unaccented English, and it was important to me to have another woman on the album. On the closing track, which is in 11, Amani got it right away. If he hears a rhythm he understands what it is. He sang on my 2017 Jazz Gallery commission ‘Embracements’ and was just incredible.”

Born in Switzerland in 1992 to a Swiss mother and Argentinian father, Grand moved to New York in 2011 and became a mentee of greats such as Billy Harper, Antoine Roney, Von Freeman, Doug Hammond and Steve Coleman. She has appeared on Coleman’s Synovial Joints and Morphogenesis, worked extensively with such colleagues as Rajna Swaminathan and Roman Filiu, and grown increasingly active as an educator. Incorporating aspects of dance and performance art into her recent work, Grand seeks to explore modern mythical stories in fresh and compelling ways, as she states in her liner notes: “A revamped mythology to fit us, to fit who we are today, to connect the ancient and the future as expressed in the present moment.”

María Grand is a saxophonist, composer, and educator currently based in NYC.

Bandcamp Daily  your guide to the world of Bandcamp